Well I’ve been wanting a small tractor to be able to help in making and maintaining a bigger vegetable garden. One problem I have is my property is to small for most tractors like a Ford 8n. Enter the Compact Utility Tractor’s on second thought —-not, they are way too much money for what I can afford right now. So what’s left—-well build my own.
I started scouring the net for plans and parts and came across this old article about building your own. You can find it HERE. It’s an article about building a midget tractor also known as Doodlebugs. Now the term doodlebug sounded funny to me so I wiki’d it and found out that quote-
“Doodlebug tractor is the colloquial name for a home-made tractor made in the United States during World War II when production tractors were in short supply. The Doodlebug of the 1940s was usually based on a 1920s or 1930s era Ford automobile which was then modified either by the complete removal or alteration of some of the vehicle body. The preservation of examples of the Doodlebug tractor has become popular in New England and upstate New York where there are several clubs [1][2] holding monthly meet-ups in the summer months to put their contraptions to the test by pulling large stone boats in a tractor pull.”
It also says-
“Doodlebugs had many names. Friday Tractors, Scrambolas, Jitterbugs, Field Crawlers, and many others as well as the most common, The DoodleBug which was a nickname for the aftermarket tractor kit made by David Bradley “The old DB”. Initially the idea of the homemade tractor came from several catalog and implement companies in the mid 1920’s to the mid 1930’s such as New Deal,[3] Peru Plow Co., Thrifty Farmer,[4] Sears, Montgomery Ward, Pull Ford, and Johnson Mfg Co.

The conversion kits were expensive, some as much as $300 and farmers, hit hard by the Great Depression were a resourceful lot. Magazines such as Popular Mechanics & Mechanics Illustrated provided instructions for building a “Handy Henry” from that “old Ford sitting in your back yard, using simple tools anyone would have.” The cost to build a “Handy Henry” made from an old Model T car or truck was about $20 according to the 1936 edition of the Handy Man’s Home Manual, and this provided a serviceable vehicle with rubber tires, a big truck rear end and two transmissions to make up for the gear reduction that the kits came with.

These Doodlebugs were used to plow, hay, haul logs, and pull out stumps. To do all this, the doodlebug needed good ground clearance for use in any conditions, going under trees, and climbing almost any terrain. For protection they had a hood, cowl radiator, a small seat, some had a small truck bed, and most had a hitching point to tow with.”
Ok cool. 🙂
Well one day while searching Craigslist I came across an ad that said “Homemade Tractor for Sale $250.”. Perfect, that’s well within my price range. I clicked on the ad and saw this little beauty. 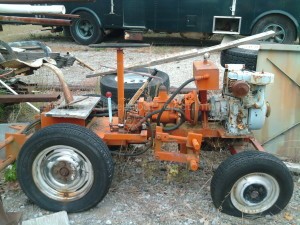 Now I know it looks kind of rough but it had all the parts already there and together and had worked in the past. The story was that an old farmer had passed away and his family sold the land and this person bought the tractor from them. He was going to restore it and use it himself but never had the time and instead of it wasting away even more he decided to sell it. So I bought it. It even came with 2 small plows. 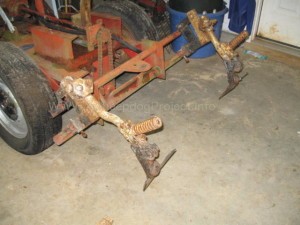 One thought on “Doodlebug Tractor Rebuild”