I’ve gotten a lot of questions asking if the 2 rifles in the picture I posted on Facebook were really the same. Well the answer is ……YES it really is the same rifle,  it has just been cosmetically changed. 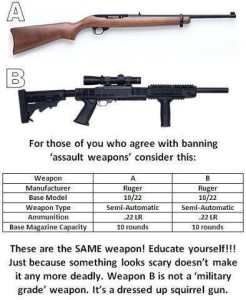 The traditional wood stock has been removed and replaced with a synthetic stock of a different design. One that allows the user to add cosmetic  items to the rifle to suit the users wants and needs.

Lets talk about some of theses items and their misconception. You can reference the following picture for clarification. 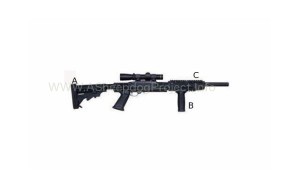 Letter A – this is known as a 6 position stock. This is not a collapsible stock. This simply lets you move the part which rests up against your shoulder into 6 different positions or lengths to accommodate people with different arms lengths and to accommodate different shooting positions. A collapsible stock completely folds out of the way to make the rifle more to the size of a pistol making it more concealable. Changing the stock does nothing to change how the rifle operates.

Letter B – this is known as a pistol grip. This attachment helps the individual have a different manner in which to support the front half of the rifle while shooting. It does nothing to change how the rifle operates.

Letter C – this is known as a quad rail. It simply allows the user to attach items to the rifle without having to drill any holes in the stock. Such as the pistol grip. Again it does not in any way change how the rifle operates.

So you have to ask yourself why is it that the politicians, like in New Jersey,  have zeroed in on these items in the laws to make them illegal to have. Simply put… I think it is pure ignorance and perception. These items are shared with rifles that are carried by military’s around the world. I agree they make the rifle look more menacing but that still doesn’t change the fact that they do nothing to change how the rifle operates. They don’t make it fire more rounds like a fully automatic weapon can, such as the military M-16 can.

“A semi-automatic, or self-loading, firearm is a weapon that performs all steps necessary to prepare the weapon to fire again after firing—assuming cartridges remain in the weapon’s feed device or magazine. Typically, this includes extracting and ejecting the spent cartridge case from the weapon’s firing chamber, re-cocking the firing mechanism, and loading a new cartridge into the firing chamber. Although automatic weapons and selective fire firearms do the same tasks, semi-automatic firearms do not automatically fire an additional round until the trigger is released and re-pressed by the person firing the weapon.”

“An automatic rifle or full-auto, is a type of magazine-fed rifle that uses either its recoil or a portion of the gas propelling the projectile to remove the spent cartridge case, cock the rifle, load a new cartridge and fire again repeatedly, as long as the trigger is held down or until the magazine is exhausted. Automatic rifles are distinguished from semi-automatic rifles in their ability to fire more than one shot in succession once the trigger is pulled. Most automatic rifles are select-fire weapons which are capable of firing in both full automatic and semi-automatic (i.e., firing one shot every time the trigger is pulled). Sub machine guns as well as heavy weapons are considered automatic weapons. Automatic weapons are heavily restricted under BATFE rulings. In the United States, Civilians can own automatic weapons, though only through a transfer and taxation process governed by the ATF. Nearly all civilian owned firearms in the United states are semi automatic.”

That last line is key in these debates, again politicians are trying to trick the UN-educated into thinking semi-auto makes it more menacing. Yet they don’t seem to be going after hand guns, shot guns, or other style rifles with the same capability as the civilian version of the M-16 known as the AR-15.

Another misconception is the rifles name,  AR does not stand for “Automatic Rifle”. It stands for “Armalite” the name of the company which first made and sold the rifle to the military. The military then gave the rifle it’s designation of M-16.  The military also  had it modified to be able to select 3 different rates of fire, from 1 round per trigger pull to 3 rounds to full auto. The civilian version is not capable of this, there is a major amount of gunsmithing needed as well as different internal parts needed to achieve this on a civilian made rifle.

I hope that this information helps some of you get a better understanding of what is really being talked about during these gun control debates. Don’t let ignorance or ill founded perception cause you to lose your 2nd amendment rights.

I am adding a new section to the blog which will be about firearm terminology, facts, and trivia.